Dr. Pearl Brower To Represent Alaska on the WICHE Commission 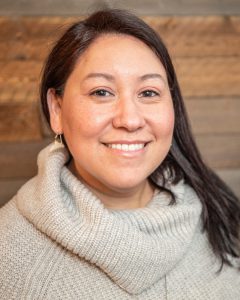 The commission is comprised of 48 commissioners from the 15 Western states and the U.S. Pacific Territories and Freely Associated States. The commissioners are leaders in higher education and include state higher education executive officers, college and university presidents, legislators, business and community leaders, and other key partners. Together, they guide WICHE’s strategic direction and assure the Western Regional Education Compact – a foundational document approved by Congress and signed into law by Pres. Dwight Eisenhower in 1953 – is carried out for the benefit of the West.

Brower serves as the president and CEO of Ukpeaġvik Iñupiat Corporation (UIC), one of about 200 Alaska Native village corporations created under the Alaska Native Claims Settlement Act of 1971. Prior to UIC, she was the senior advisor for Alaska Native success, institutional diversity and student engagement at the University of Alaska. In 2020, Brower left Iḷisaġvik College, Alaska’s only Tribal College and the northernmost accredited community college in the United States, where she had been in administration for 13 years and served the last eight years as president.

“Pearl Brower’s extensive background in higher education and variety of leadership roles will prove to be a great asset to WICHE,” said WICHE President Demarée Michelau. “Her experiences in diversity efforts and tribal institutions bring a unique perspective that will pair well with WICHE’s mission to advance student success.”

“Education can change people’s lives in such meaningful and positive ways, and it plays a huge role in the health and strength of our communities,” Brower said. “I look forward to sharing in the collaboration and partnership that the WICHE Commission brings to higher education in the West.”

Brower is a recognized leader and volunteer. She was named one of Alaska’s Top 40 Under 40 in 2015 and the First Alaskans Institute Young Alaska Native Leader in 2019, and she received the YWCA Women of Achievement award in 2019. She also serves as the Alaska Native representative on the Alaska Postsecondary Access and Completion Network, on the Alaska Airlines Community Advisory Board, on the Foraker Group’s Operations Board as chair, and as a board member for the National Museum of the American Indian.

Since 1953, the Western Interstate Commission for Higher Education has been strengthening higher education, workforce development, and behavioral health throughout the region. From promoting high-quality, affordable postsecondary education to helping states get the most from their technology investments and addressing behavioral health challenges, WICHE improves lives across the West through innovation, cooperation, resource sharing, and sound public policy. WICHE members include: Alaska, Arizona, California, Colorado, Hawai’i, Idaho, Montana, Nevada, New Mexico, North Dakota, Oregon, South Dakota, Utah, Washington, Wyoming, and the U.S. Pacific Territories and Freely Associated States (the Commonwealth of the Northern Mariana Islands, Guam, the Republic of the Marshall Islands, the Federated States of Micronesia, and the Republic of Palau).

Melanie Sidwell is the Director of Communications at WICHE, where she supports our mission through strategic communications, media relations, social and digital media, and content services. Prior to joining WICHE, she served in a variety of marketing, communications and alumni relations roles at the University of Colorado, and she worked as a journalist for newspapers in Nebraska, Florida and Colorado. A first-generation college graduate, Sidwell holds a bachelor’s degree in journalism from the University of Nebraska-Lincoln, a master’s degree in media studies from the University of Colorado Boulder, and currently is a PhD student in information science at CU Boulder.